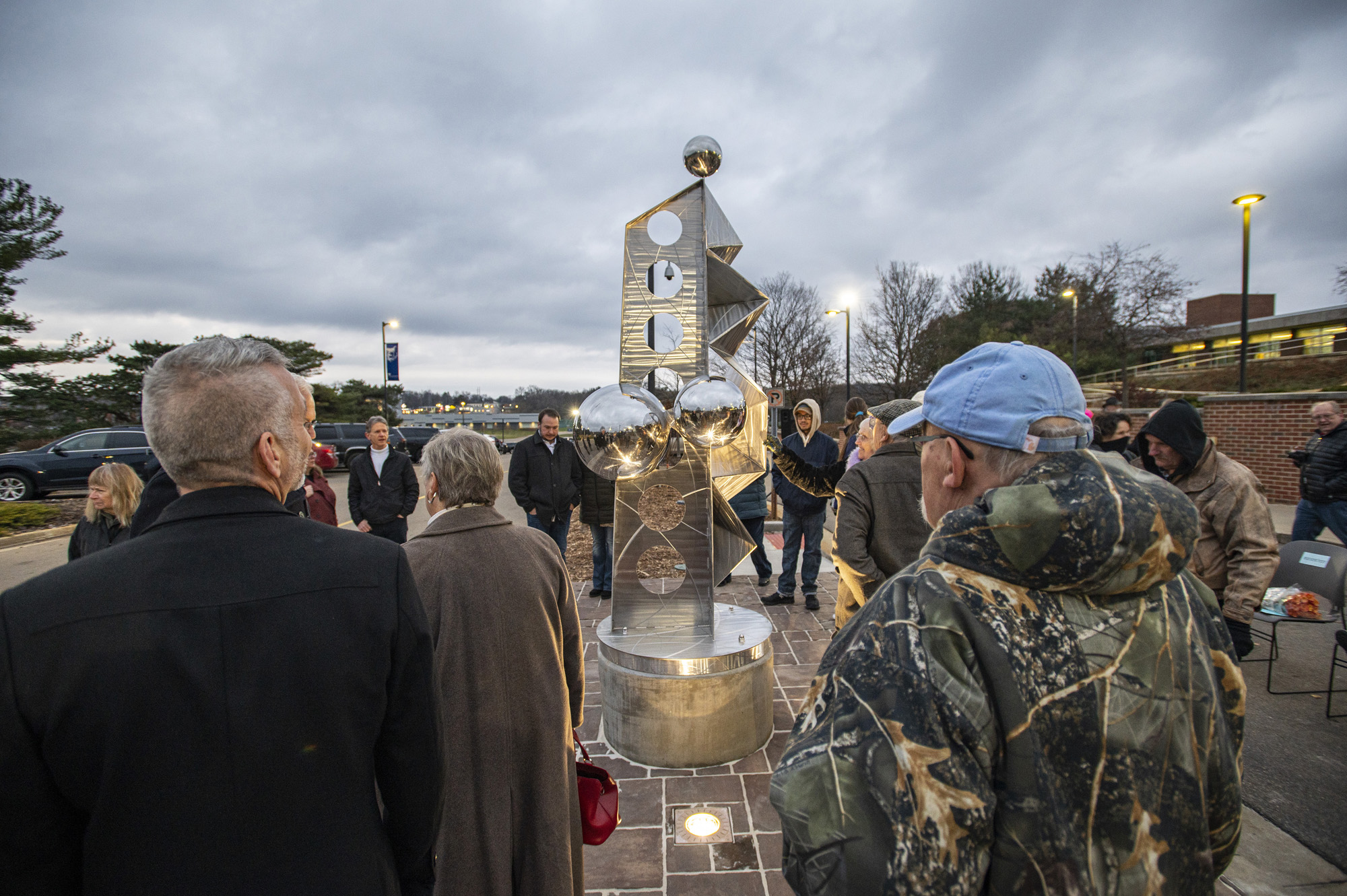 The mission of the Kellogg Community College Foundation Art on Campus Initiative is to provide art experiences on KCC campuses for students, faculty, staff and the community. Original works of art are on display throughout KCC as part of the College’s Permanent Art Collection and Sculpture Initiative.

The goals of the Art on Campus Initiative are to:

The initiative began in 2004 with the help of the DeVries Art Fund started by longtime KCC supporters Eleanor R. and Robert A. DeVries.

KCC’s Permanent Art Collection is on display throughout KCC’s buildings. Most of the collection can be viewed during KCC’s hours of operation. It includes artists such as Kate Demke, Eleanor DeVries, Martin Hubbard, Lily Hunter, Shuichi Murakami, Kay Randel and Dee Seymour. Much of the art represented in the collection comes from KCC faculty, staff, students and other regional artists.

View our Self-Guided Art Tour brochure to view the location of each work of art on KCC’s North Avenue campus in Battle Creek.

Click here to view photos of our loaned sculptures on display through June 2024.

Click here to view photos of the November 16, 2022 unveiling of FACETS.

Click here to learn more about the DeVries Gallery and Exhibits.

In November 2020, KCC and the Battle Creek Chapter of the American Association of University Women unveiled “Hope,” a bronze sculpture of a young woman created by former KCC student Paula Blincoe. This sculpture is installed at the North End Gateway micro park on the northwest corner of KCC’s North Avenue campus.

Supported by Eleanor and Robert DeVries and coordinated through the Art on Campus Initiative, the DeVries Art Lecture Series brings distinguished artists, art historians, etc., to provide lectures and workshops on art topics for students and community.

History of Art on Campus

The Art on Campus Initiative began in 2004 with the help of the DeVries Art Fund started by Eleanor and Robert DeVries, longtime KCC associates and namesakes of the College’s Eleanor R. and Robert A. DeVries Gallery.

Eleanor DeVries graduated from Valparaiso University (Indiana) in 1957, with a B.S. in Education. As the DeVries’ four children grew older, Eleanor continued her education. She received MA and MFA degrees, with honors, from Western Michigan University, in 1987 and 1988, respectively. While at the university, she received first place in the Annual Student Art Competition and also the Johnson-Howard Company Merit Award.

Eleanor taught in the Chicago and Dayton public schools systems, at the Art Center of Battle Creek, Kellogg Community College and the Institute for Learning in Retirement. She developed and taught a summer class for children called “New Angles for New Photographers” and presented a yearlong series of slide programs to integrate art with the social studies curriculum for 300 sixth graders in the Lakeview, Michigan, School District.

From 1987, she has had artwork accepted in more than 145 juried regional, statewide and national competitions in such diverse mediums as acrylic, oil and watercolor painting; photography; and handmade paper. Her work has been featured in approximately 15 solo exhibitions. In all mediums her creations show love of nature and bright colors and her interest in spiritual and psychological ideas. The Art Center of Battle Creek, Kellogg Community College, Kalamazoo Institute of Arts, Michigan Watercolor Society’s statewide exhibits, Carnegie Museum, Lansing Art Gallery, Central Michigan University, and the Alden B. Dow Museum of Science and Art in Midland have all included her work. She has also had works accepted in juried statewide and national religious art competitions in Evanston, IL, Detroit, Michigan and East Lansing, Michigan.

Her work has been diverse. Eleanor has continued to create watercolor/mixed-media paintings. These bright, colorful images include prints of leaves and seeds, and sprayed as well as brushed paint. Current and past series of photographs and paintings have these topics: Seedtime and Harvest, Pathways, Along the Trail, Growth, Hard Places, and Woodland Musings. The sprayed paint and multiple layers encourage a variety of interpretations. Photography is also a medium in which she expresses personal ideas.

In 2003, Western Michigan University celebrated 100 years. During this year Eleanor was one of 100 alumni, from their 3,400 graduates, who were honored as the “Art Alumni 100.” In 2004, she was honored to be inducted into the eight-member “Alumni Art Academy.” In 2000, with the Miller family serving as Honorary Chairs and with Eleanor and Robert DeVries serving as the Public Sector Chairs, the United Arts Council of greater Battle Creek campaign successfully raised $500,000. She and her husband have loaned items from their personal collection and were co-curators of three exhibits: Eastern Orientation: the Art and Culture of China, (2003); The Art of Adornment, (2006); and Art from the Land of the Snow Leopard (2008).

The DeVries’ received the 2004 Battle Creek Rotary Club Red Rose Award for distinguished community service and the 2007 Michigan Governor’s Civic Leader in Arts and Culture Award; they served as Honorary Co-Chairs of the 2008 Governor’s Awards for Arts and Culture. In 2008 they chaired the successful “Empty Bowl” fund-raiser which brought together artists, dignitaries, students, and educators to benefit the eight-county South Michigan Food Bank. For the first time textile artists from Cal-Co Quilters and watercolorists from the Southwest Michigan Watercolor Society donated items.

Western Michigan University created the Medici Society for supporters of all the visual and performing arts. Annually when the group meets, one or two individuals are honored as recipients of the Cosimo Cap. In 2009, Robert and Eleanor DeVries were the honorees.

For 27 years Bob DeVries served as Program Director in health and leadership for the W.K. Kellogg Foundation, Battle Creek, Michigan, one of the world’s largest philanthropies. He was founding Director, Kellogg International Leadership Program, and for nine years directed the Foundation’s international grants for masters and doctoral studies involving more than 1,000 fellows from 30 countries. Mr. DeVries retired in January 1999. Recently, he has consulted for the Joint Center for Political and Economic Studies, University of Michigan, Columbia University, W. K. Kellogg Foundation, and Battle Creek Health System.

Before joining the Foundation staff in 1971, he served as Chief Executive Officer of a Michigan community hospital. DeVries holds a B.S. Degree (Physiology) and an M.B.A. Degree (Health Management and Policy) from the University of Chicago. He is a Fellow of the National Center for Health Services Research, the American College of Healthcare Executives, and the Canadian School of Management. Author of more than 60 publications, DeVries is an Honorary Advisor to Beijing Medical University; Medical College for Health Staff, Shanghai; and the Shanghai Number One People’s Hospital. Robert DeVries lectured in 10 countries, received the Distinguished Service Award of the American Society of Allied Health Professions and of Ohio State University and was Advisor on rural health to two United States Secretaries of Health and Human Services. DeVries was an invited speaker at the Association of American Medical Colleges, National Institutes of Health, and the Harvard Medical School. DeVries is the only individual to receive the American Hospital Association’s “Living the Vision” Award (in 1999) for his influence in creating a society where all persons reach their full potential for health. Also, in 1999, DeVries received the Special Recognition Award for distinguished service from the Michigan Health and Hospital Association. In 2003, he received a Certificate of Honor from Peking University, Beijing. His Alma Mater, the University of Chicago, honored him with its 2005 National Award for Public Service. In Jan. 2006, he was one of 25 named to the American Hospital Association’s Blue Ribbon Committee on Healthcare Governance.